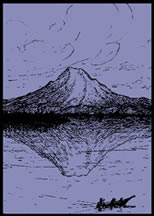 The name of the Squaxon people is sqwA’xcldabe, which means “First to be changed.” They were the first to float away after the flood. Some of them landed on the Oregon Coast and now speak the same language as the other people of that region.

The Great Flood | The Rash Youth and the Salmon