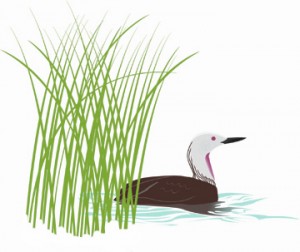 On the east side of the Olympic Peninsula is a small lake, Mason Lake, which the Indians said was the home of evil spirits. Not far from the lake lived a little boy, a very good swimmer. He spent much of his time in the salt water and on the shore of what is now called Hood Canal. His mother often told him that he must never swim in the haunted lake. If he should swim there, he would anger the evil spirits and they would punish him. But this little boy sometimes did what his mother told him not to do.

One warm day he disobeyed her and went swimming in the lake of the evil spirits. He could see no demons, but he did see many trout swimming about in the clear water. He swam and dived and had much fun all afternoon. He tried to catch the swift moving trout, although he had no net with him. At last he caught one and swam ashore with it in his hand.

Hungry after his long swim, he thought to himself, “What a fine meal this would make!” So he built a fire on the beach, cooked the trout and ate it.

The fish tasted good, but on thing the little boy did not know . . . one of the evil spirits of the lake was hidden in the speckled trout. Just as the boy swallowed the last bite, he was changed into a loon.

Frightened, he flew to his home. Round and round he flew over the lodge calling his mother. With the harsh cries of the loon, he tried to tell her what had happened to him. But his mother did not understand. She did not know that the crying loon was her little son. She even tried to beat off the bird with a stick. Fearing she would kill him, the little boy, still crying, flew back over the lake.

To this very day loons give harsh cries of warning to boys and girls who do no obey their mothers.

The Rash Youth and the Salmon | Qawila's the Warrior