Theresa grew up on Squaxin Island shortly after the turn of the century, a time when an Indian basket-collecting fad created a profitable, although time-intensive, occupation. Steamer ships drew near to the island each Saturday morning, picking up the Squaxin Island women who stood on floats loaded with their goods to sell in Olympia. Saturday became known as Indian Day and was eagerly awaited. 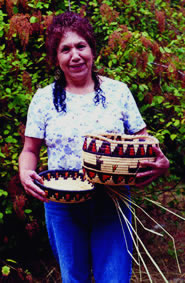 Many members of the Squaxin Island Tribe are master basket weavers. They use cedar, cedar bark, cattails, sweet grass and woven into intricate patterns to create clam baskets, decorative lapels, earrings and other types of gathering and storage baskets.

The museum’s exhibit of these works of art is exquisite.  Don’t miss it!