Version One Told By Jim Krise

The Great Spirit came and told the people to make some big rafts; that a lot of rain was going to come and destroy a lot of the earth and its people. The Indians built big rafts of cedar logs lashed together with cedar root ropes, and were told to drift toward a certain mountain.

There was a big rock on the mountain, and they tied onto this rock. About the time their rope was giving out, they didn’t have any more length of rope, the rains ceased and the waters receded.

There were a great number of Indians on this raft, but those chosen by the Great Spirit to carry on were not selected until after the flood. The animals, who came after people, were originally people. They were changed into their present form at this time by the Great Spirit who judged people and changed them. For instance, the Great Spirit, after observing the people on the raft, said to one young man, “You have a nice, beautifully-formed body and are fleet of foot, but you are overly vain about your running ability, so you shall become ‘Deer’ and forever depend upon your fleetness of foot to survive.” To one cross old woman, he said, “You are a grumpy old woman so you shall become ‘Bear’ and you will have to walk on all fours and forever scratch around for sustenance.” (To this day Indians will say, “Don’t be mean to bears in the woods. Maybe one is your grandmother.”)

All the animals have a similar explanation for being. They were judged at the flood and, depending upon what they had been as human, they took the same characteristics into the animal world. 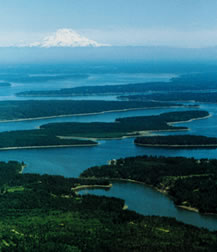 Version Two Told by Cecil Cheeka
Ancient legends tell us of a great flood, not much different than the story in the bible.

The people were told to prepare several canoes and stock them with food supplies for many days, as it was going to rain and there would be a great flood. It rained and rained until, pretty soon, the water was so deep it was up to the mountain tops. The people took out their ropes and tied their canoes to the top of the Olympic Mountains to keep from drifting away and getting lost.

The rain eventually stopped, and the water started to recede. Some of the canoes broke loose and floated away. Some to the north, some to the east and some to the west. The ones that floated south settled in what is now known as the Puget Sound Basin. Thus creating all the bands of natives that are our ancestors.

The inlets of South Puget Sound were full of our tribal people, until, in the late 1800s, diseases brought in by Europeans (sometimes intentionally) decimated our populations. Where once there were multitudes, there were few, if any, survivors of our people.

The First Salmon | The Origin of the Squaxins